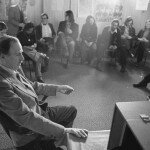 In McLuhan vs. McLuhan: The optimist and the monitor, a speculative encounter, the inaugural session of McLuminations on May 29, 2011, legendary McLuhanist Derrick de Kerckhove and Berlin McLuhan scholar Steffi Winkler reflect on McLuhan’s inner conflicts with regard to electronic media using original material selected from the Marshall McLuhan Salon archive. In this speculative encounter between two faces of McLuhan, the two scholars will attempt to extrapolate from the documentary material what McLuhan might have to say about our current media age.

The series title McLuminations refers to the tradition of ‘illuminated manuscripts’ whereby texts were adorned by painstaking ornamentation which contributed to the interpretation as well as to the aesthetic pleasure of reading. The tradition of Illumination ceased with the invention of the Gutenberg Press.  Now, as we enter a new era, a ‘global village’ generated through digital media,McLuminations proposes we retrieve the video-text of electronic media culture’s foremost prophet Marshall McLuhan from the obsolescing media in which his thought is so concisely inscribed. The series ‘illuminates’ this work through screenings such that the archival McLuhan may be projected to reflect upon our current age.

Archival Material:
You can access some of the archival material that will be illuminated upon during this first McLuminations Here. In addition, Derrick de Kerckhove will be drawing on and referring to a collection of video material which you can access Here.

This event series will be documented with the aim of publishing a bilingual German-English catalogue introduction to McLuhan as experienced through the video materials in the Marshall McLuhan Salon Archive.

Two more McLuminations events are planned at the Canadian Embassy as part of  McLuhan Centennial commemoration in Berlin in 2011.  McLuminations #2 and #3 will take place in September and November respectively.

This event is part of the RE-TOUCHING McLUHAN - McLuhan in Europe 2011 Centennial Weekend. This event is free and open to the public, but spaces are limited so please RSVP at with the subject heading ‘McLuminations’.