RE-TOUCHING McLUHAN – The Medium is the Massage Conference 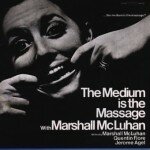 RE-TOUCHING McLUHAN – The Medium is the Massage Conference

This international academic conference is curated by Prof. Dieter Daniels of the Academy of Visual Arts, Leipzig and moderated by Christopher Salter. It will consist of keynotes and leading thinkers in the field exploring Marshall McLuhan’s unique take on senory effects of electronic media as “extensions of man” and his legacy on artistic and digital cultural practice.

Richard Cavell with his keynote lecture McLuhan, Tactility, and the Digital
Martina Leeker with McLuhan today, seen with the eyes of 1960′s Neo-Avantgarde and contemporary Media Art
Claus Pias with Freiheit statt Freizeit
Katja Kwastek with Mediated Massage: Embodiment, Connectedness and Alienation in New Media Art
Michael Darroch with Explorations across Anonymous History and Acoustic Space
Janine Marchessault with McLuhan’s Fair: Expo ‘67 as Counterblast
Dieter Daniels with An ear for an eye: Traveling visual, acoustic and tactile space with McLuhan, John Cage, Nam June Paik and Walter Benjamin
Lorenz Engell with McLuhan as Mouse: The Tactile and the Index

“The television image … is an expansion of the tactile sense … a medium, which includes all of our senses in an in-depth interaction.” Marshall McLuhan, 1964

Forty-five years ago, many of the ideas put forward by Marshall McLuhan sounded very daring and provocative. From today’s perspective, though, some of them were actually prophetic. This includes his theory of the multi-sensory and crossmodal effects of electronic media. Through immersion (games, virtual reality) and tactile interaction (multi-touch interfaces) these days the corporeality of what is digital has become a natural component of media-based lifeworlds. The enhanced importance of acoustics in the perception of media and media theory is also probably a legacy of McLuhan’s. A preview of our contemporary multi-sensory media world can be found in his books “The Medium Is the Massage” (Marshall McLuhan and the graphic designer Quentin Fiore, 1967) and “Counterblast” (Marshall McLuhan and the artist and designer Harley Parker, 1969).

The conference will extract from McLuhan’s multi-faceted and sometimes contradictory oeuvre a thematic vector into today’s media reality. Of special interest here is the impact of McLuhan on the media arts from the 1960s to the present, the “embodiment” of modern media technology, and McLuhan’s own media presence.

McLuhan and Early Media Arts: In Expanded Cinema, early video art, and the cybernetic experiments of the 1960s/1970s, many artists (for example, John Cage, Nam June Paik, Stan VanDerBeek, USCO Group) and theorists (Gene Youngblood, Stewart Brand) directly referenced McLuhan. His claims concerning the end of written culture and a new era of electronic totality of the senses, which are spread around in McLuhan’s scripts and interviews, became concrete experiences of a possible future in early media art.

McLuhan and the Sound of Media: According to McLuhan, the “auditory space” of electronic media is multi-directional, synaesthetic, and interactive. He argued that we are enveloped by sounds like seamless material as a “pattern in which the components coexist without a direct, linear context or direct, linear connection, and create a field of simultaneous relationships”. In today’s Sound Studies and their critique of the hegemony of the visual, many of these aspects are taken up and developed.

Tactile Media since the 1990s: In the interactive and immersive media art of the 1990s, the tactility of the digital world was tested in multiple ways. Only a few years later, interfaces of interactive mass media were configured in a similar way. Parallel to this, over the last twenty years a new approach in media theory has developed that understands HCI (Human–Computer Interaction) as a sensorimotor dialogue rather than code-based programming. Especially through the embodiment of interaction with wireless media (mobile phone, tablet computers etc.), McLuhan’s dictum of the media as the “Extensions of Man” is once again highly topical.

McLuhan in the Media: The influence of McLuhan’s work — rich in associations, kaleidoscopic, in parts eclectic — has developed in manifold directions. This includes McLuhan’s prominent role as media personality, especially on television, where his free, intuitive, and gestural rhetoric contributed significantly to his considerable prominence. In this, McLuhan anticipated today’s spectacularisation and popularisation of science in the mass media.

transmediale will be convening and running the conference which will include both a ‘traditional’ local audience as well as a live streamed and simultaneously moderated online segment which will serve and document the conference bringing its content beyond the confines of the time/space of the Berlin event. This event is part of the trio of McLuhan Galaxy conferences taking place in Barcelona May 23 – 25, and Rome May 30 – June 1, 2011.

This event is part of the RE-TOUCHING McLUHAN - McLuhan in Europe 2011 Centennial Weekend. The Medium is the Massage Conference is free and open to the public, but spaces are limited so please RSVP at with the subject heading ‘Conference’.